When sisters Cristina and Cara Garrison invited their father to breakfast at Highland Park’s Country Kitchen more than 20 years ago to discuss taking over running his Forest Bootery store, they had no idea they’d be at the helm when the Lake Forest icon celebrated its 70th anniversary.

“I can tell you straight that we didn’t see this coming,” says Cara with a laugh. “In fact, if it weren’t for my husband—who was my boyfriend at the time—pushing Cris- tina and I to give the business a go and continue the legacy, who knows what might have happened.”

Cristina and Cara acquired Forest Bootery from their father in 1996, a long-standing business he purchased two decades earlier (that had opened in 1949).

“My dad had part ownership in a shoe store in Yorktown (in the Western Suburbs),” Cara says. “He realized he wanted to have his own business and began to travel around to see what might be available in different suburbs. When he arrived in Lake Forest, he knew the business had to be here.”

Outbidding an offer on the table, Paul Garrison purchased one of the two local shoe stores in Lake Forest at the time and renamed it the Forest Bootery. “I remember my mom sitting at the kitchen table tracing rolls of masking tape to create the logo that we still use for the store today,” Cara says. 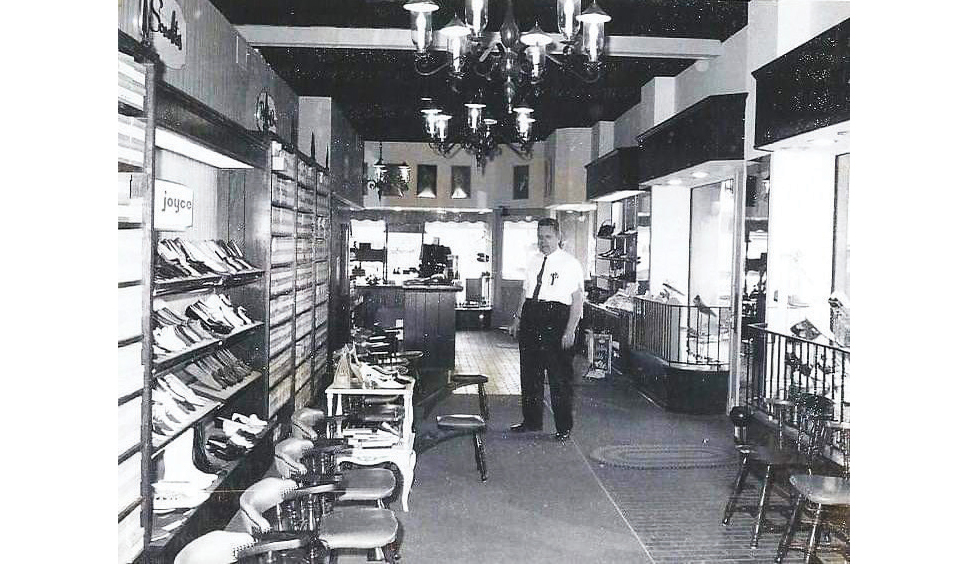 Mort Gibbion is shown in the store around the time he sold it to Paul and Diane Garrison.

While Cristina and Cara both worked at the Forest Bootery growing up, they didn’t set out to follow in their father’s footsteps.

“Cristina went to school for fashion merchandising and I wanted an art degree,” Cara says. “It wasn’t easy working at the store. Dad’s sales staff was made up of serious shoe guys who had a set way of doing things. I still remember the day my register was off by one penny and the store manager was very upset. So, I quit. It’s kind of funny how things come full circle.”

Without hesitation, Paul ultimately agreed to sell the business to his daughters. At the weekly sales meeting following their memorable Country Kitchen breakfast, Paul introduced the sisters to the sales team as their new bosses without any warning.

“And then he left the meeting,” says Cara. “Cristina and I had no idea what to say or what to do, but we figured it out.”
Not surprised by their father’s “sink or swim approach,” Cristina and Cara dug right in. They worked hard, learned a lot, remodeled the store, and updated the product mix. When the Outdoorsman in Lake Forest closed its doors in 2000, the Forest Bootery expanded into outerwear. In 2005, their success led them to open a second location in Libertyville that Cristina now oversees. In 2010, the sisters brought in women’s clothing and accessories to enhance their offerings even further. 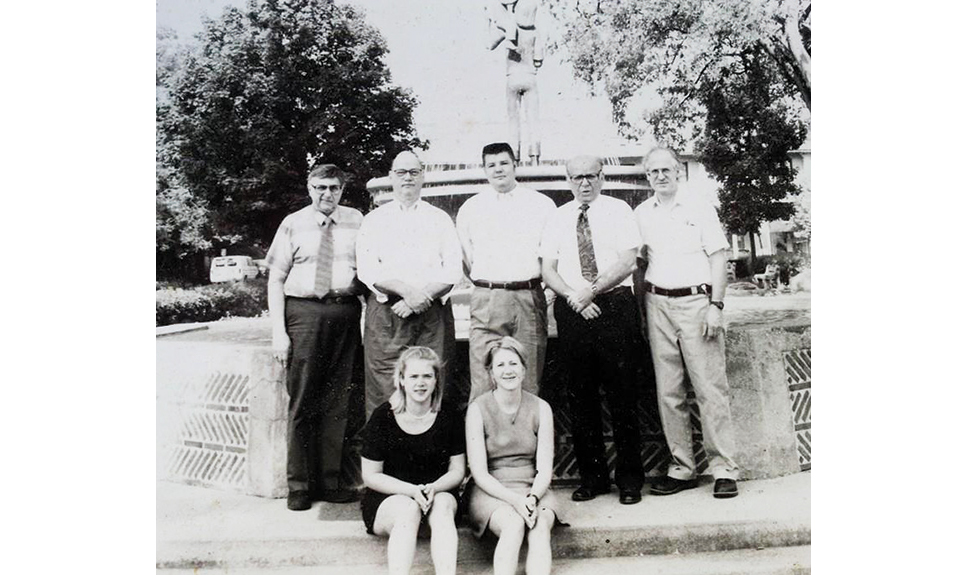 Cristina and Cara Garrison are shown with the crew of Forest Bootery when they took over the store from their father in 1996.

“We’ve had to reinvent ourselves over the last 10 years,” adds Cristina, explaining the hardest part of what she and Cara do is wear many different hats as business owners. “The retail market isn’t easy and you have to be willing to accept that and adapt when you can. Introducing women’s clothing was part of this. We wanted to give our customers a chance for a one-stop-shop of clothes, shoes, and accessories.”

On the flip side, Cristina and Cara have enjoyed supporting young fashion designers before the national chains discovered them.

“It’s been fantastic to watch brands like Jon Josef go on to be a huge business, knowing that we had them when no one else did,” says Cara.

While the future is never certain, Cristina and Cara do see potential for their own children to one day take over the business. “We definitely have that sales gene in our family,” Cara says, who loves watching her high school-aged daughter, Cleo, and her niece, Pia, work at the Lake Forest location on Sundays. “We call them our Sunday dynamo. They might be quiet and shy at home, but they have this confidence that comes out on the store floor.”

As the sisters celebrate 70 years of hard work this month, they believe there could be 70 more if they keep some of their father’s adages close to heart.

“Dad’s mantra was to always treat your customers right and to always try to have what they are looking for,” Cara says. “At this point, so many of our customers have become our friends and this is what we’re all about. If we weren’t running this business, I’m not sure anyone else could.”